“You need to get comfortable being uncomfortable.”

This was the blunt feedback one of our early adopters gave us during his onboarding call.

As co-founders, we’d spent the past several months doing customer research for Userlist, collecting a round of pre-orders, and using our findings to build a very raw MVP. Now, we were finally ready to invite our first few customers into the product.

But when the time came for onboarding calls, we hemmed and hawed — all three of us nervous about showing people real, actual product screens, and answering tough questions about the MVP’s core features.

But in the end, it turned out that our early adopter was right. We took his advice — we showed him the actual product, got deep into a features discussion, and lo and behold: he walked away so eager to come on board!

This article is a continuation of that sharing process: below, we’ll explain our product decisions and show our progress to everyone, not just those who pre-ordered.

To recap, here are the initial core features of the app that customers can expect:

Now, I’ll walk you through the key screens and explain some of our product decisions. Our design choices were largely based on customer research, but also on my own experience with other email automation tools.

Disclaimer: these are merely design layouts which represent our current product vision. Since the core part of our strategy is promptly acting on user feedback, virtually anything is subject to change at any time. 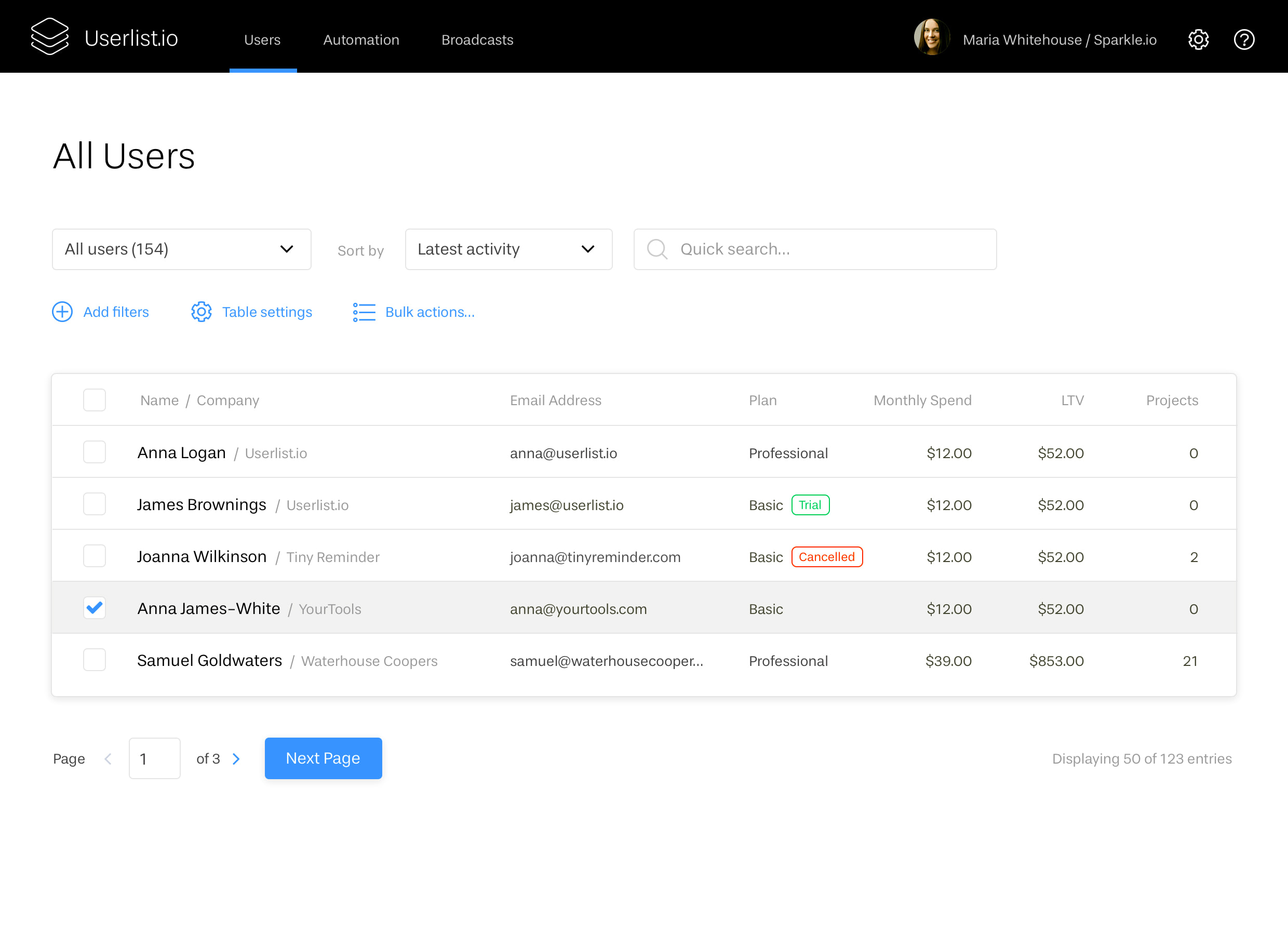 The heart of the product is the user list — hence the name. This simple admin panel allows SaaS founders (our customers) to see who exactly their users are, with names and key details like LTV or plan information.

One of the early frustrations with my previous SaaS product was the lack of such a user list. When I launched the beta version of that product, I realized that there was no UI to see my new users (unless I wanted to build a custom admin dashboard, which comes with a development cost). And my analytics tools only showed faceless data with session IDs! As a result, I opted for Intercom, but I can still remember that feeling — not being able to monitor such obvious information was frustrating.

From the user list, the founder can navigate to each individual profile. Let’s see what these profiles look like. 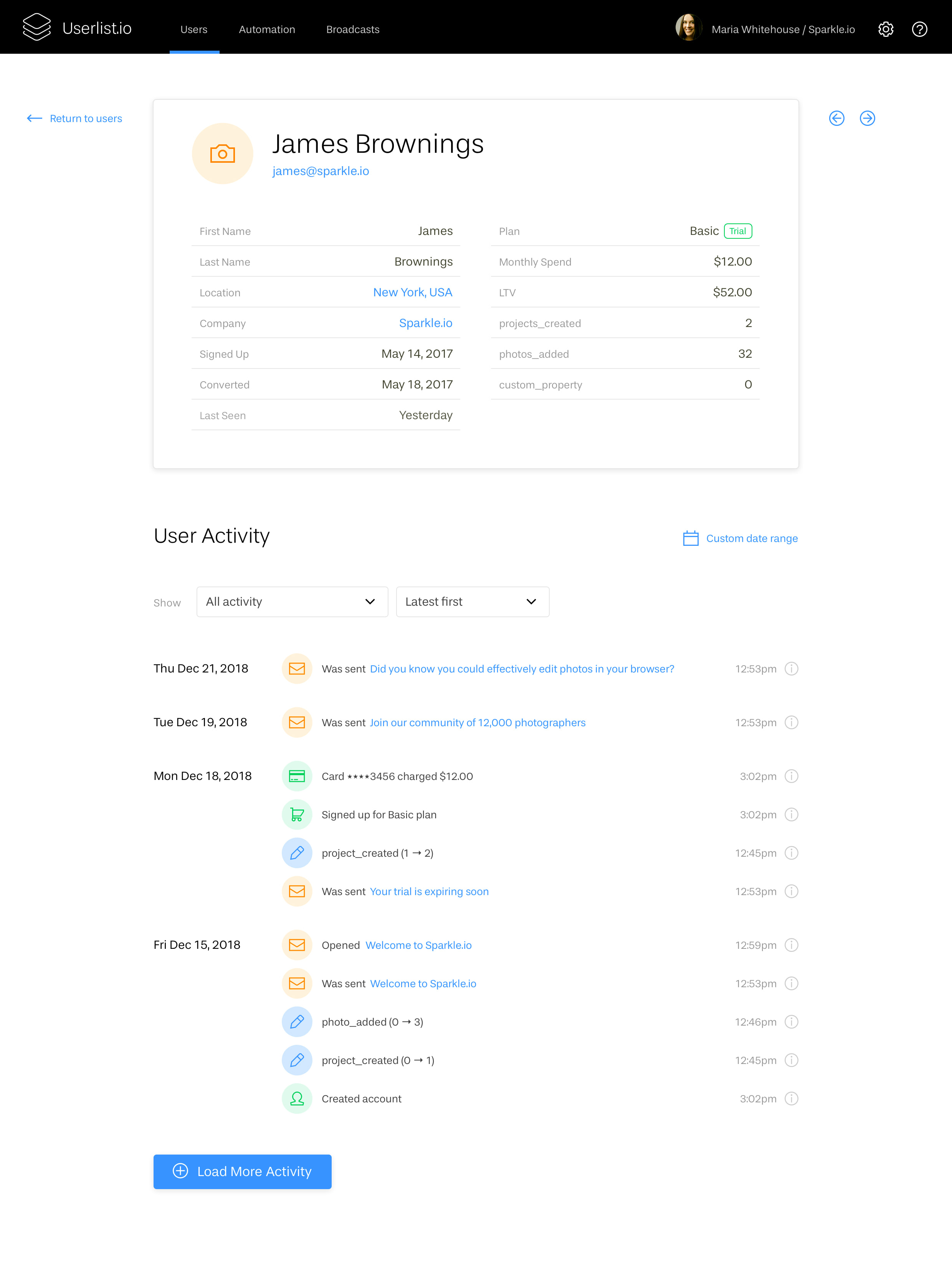 The goal for this screen is to provide an overview of the user data (including custom properties), and give us an insight about user activity.

Our goal is not to get as granular as tracking clicks or mouse movements: analytics tools like FullStory can do that much better. Instead, we want to paint a larger picture. We want to help you see what exactly led to a conversion, and how communication lines up with other user activities — without having to switch between multiple tools. 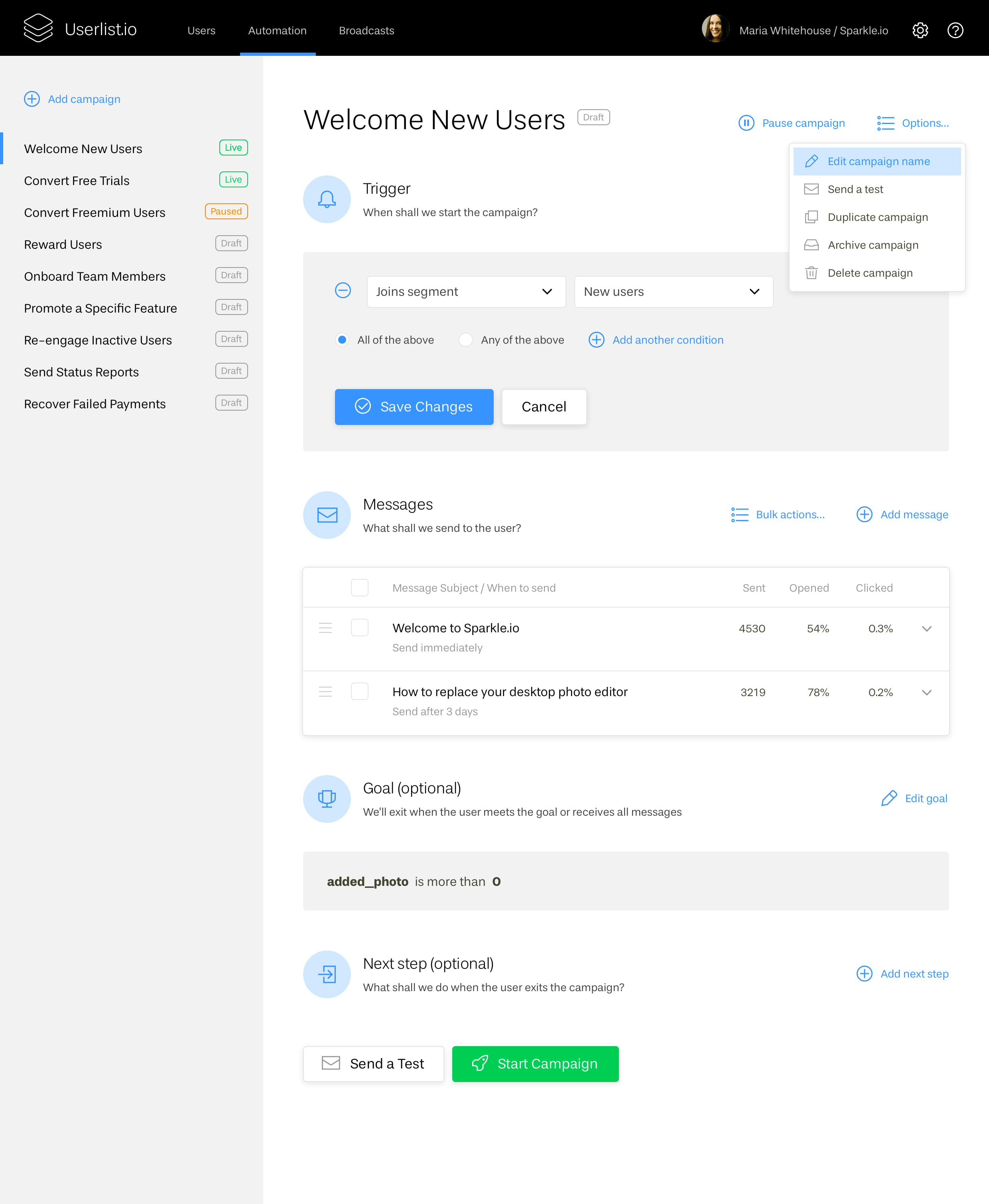 Behavior-triggered campaigns are the core of our automation. This screen shows how you can set up a campaign using four sections:

We had a lot of debates with Benedikt about how the automation system should look and work. We could have designed a visual workflow system, like ones you see in Drip or ConvertKit. But a few things stopped us from doing that early.

First, talking to other founders (and my own experience) shows that their existing automations are not very  complex. Second, unlike marketing, where a customer can be passively taken through a hierarchy of content and infoproducts, SaaS users are way more diverse in their ways of using a product. Hardly ever there is an opportunity to determine a logical “tree” that truly requires visual automation. And third, we wanted to get enough user feedback before going down that rabbit hole. Building a visual engine would take 5x time and resources — which is 100% not viable at our early stage with so many unknowns.

Here are some other design decisions taken along the way: 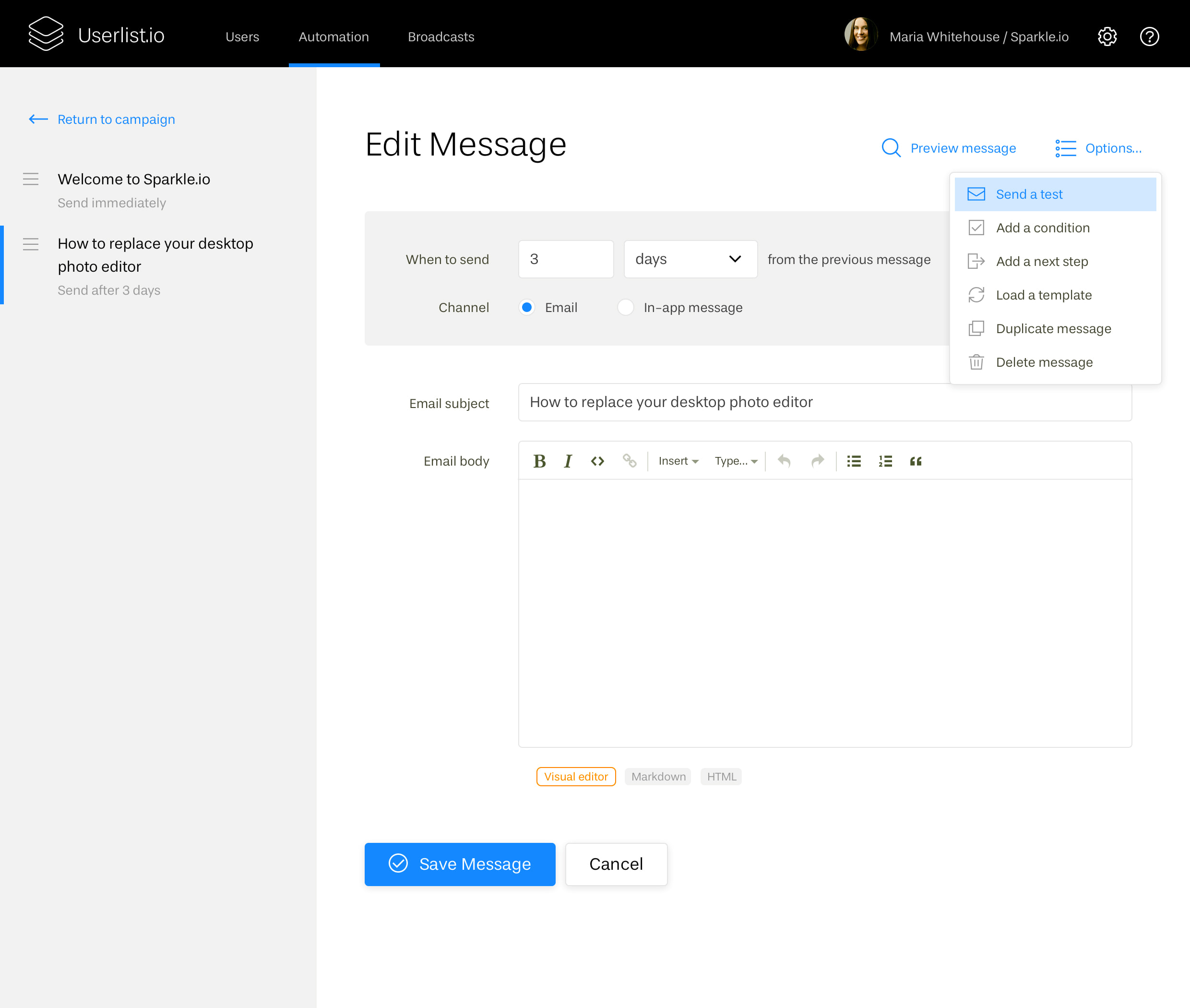 A few design decisions should streamline the editing process:

For the MVP, we had planned to have one email template — “plain text but better” (see below). It’s neutral, but very polished: featuring nice typography, structured headlines, and an accurate footer. 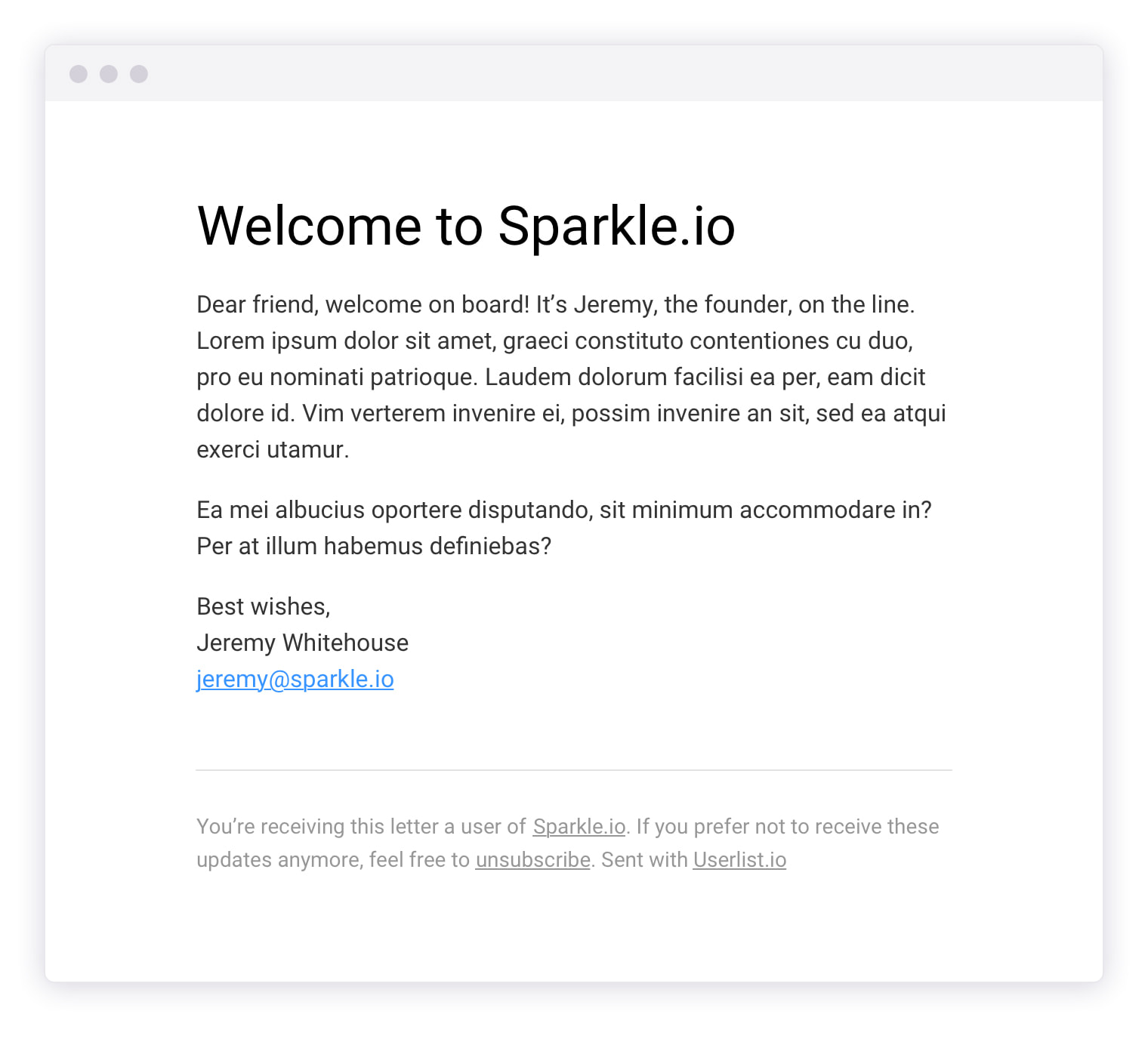 However, our conversations with early paying customers made us change our mind. They liked our styling visually, but a lot of them would still prefer simple emails that look personal — as if they were sent from Gmail. So we will probably give founders a choice between the styled template and the “plain text” template. And down the road we’ll add custom styling, such as picking fonts and colors.

While none of these features will be implemented now, we have already thought about our settings. The screens below will give you an idea of the settings we’ll have eventually, like multi-user access and fancy billing. Launching publicly without a billing system is a very popular war story among many founders. 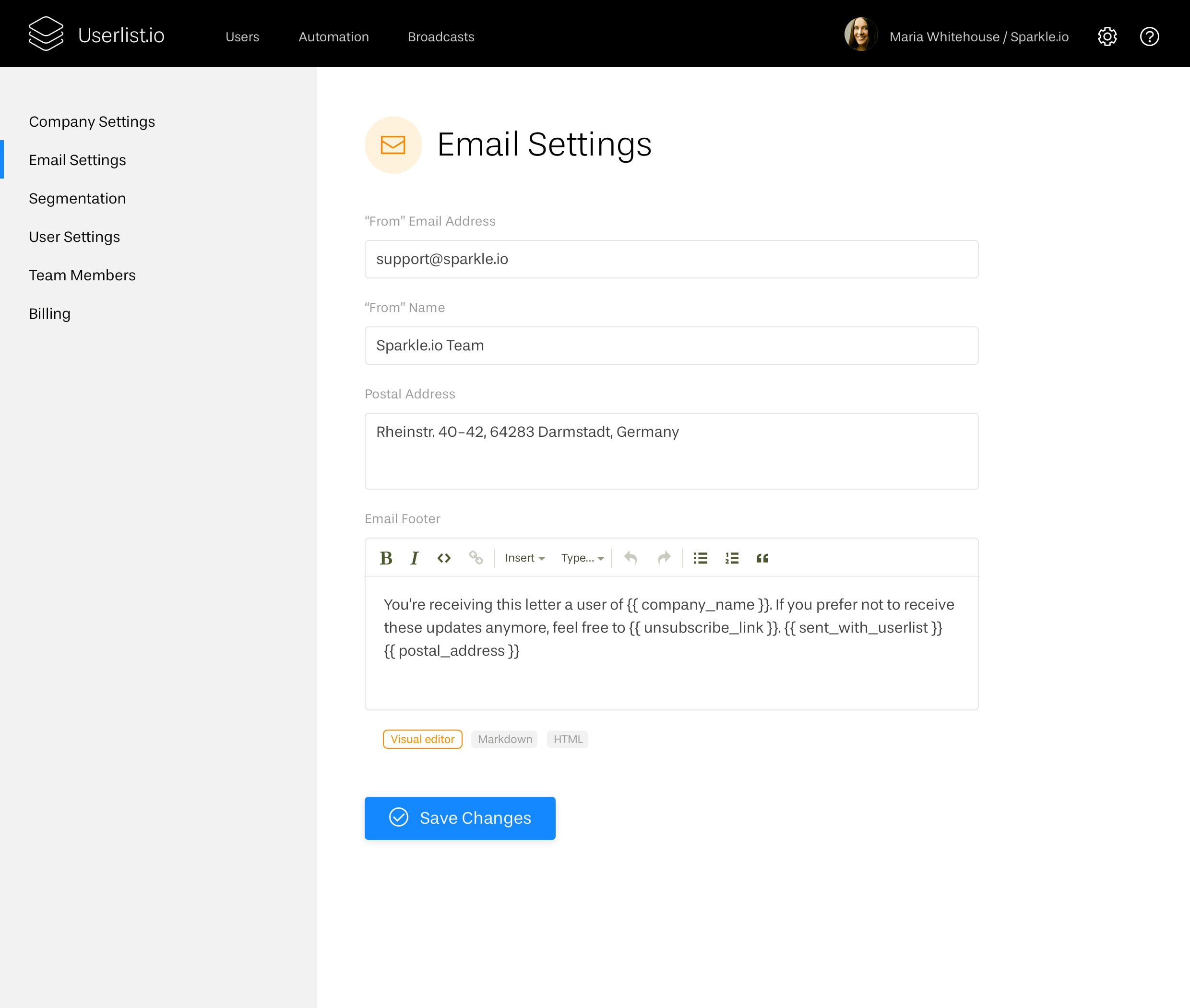 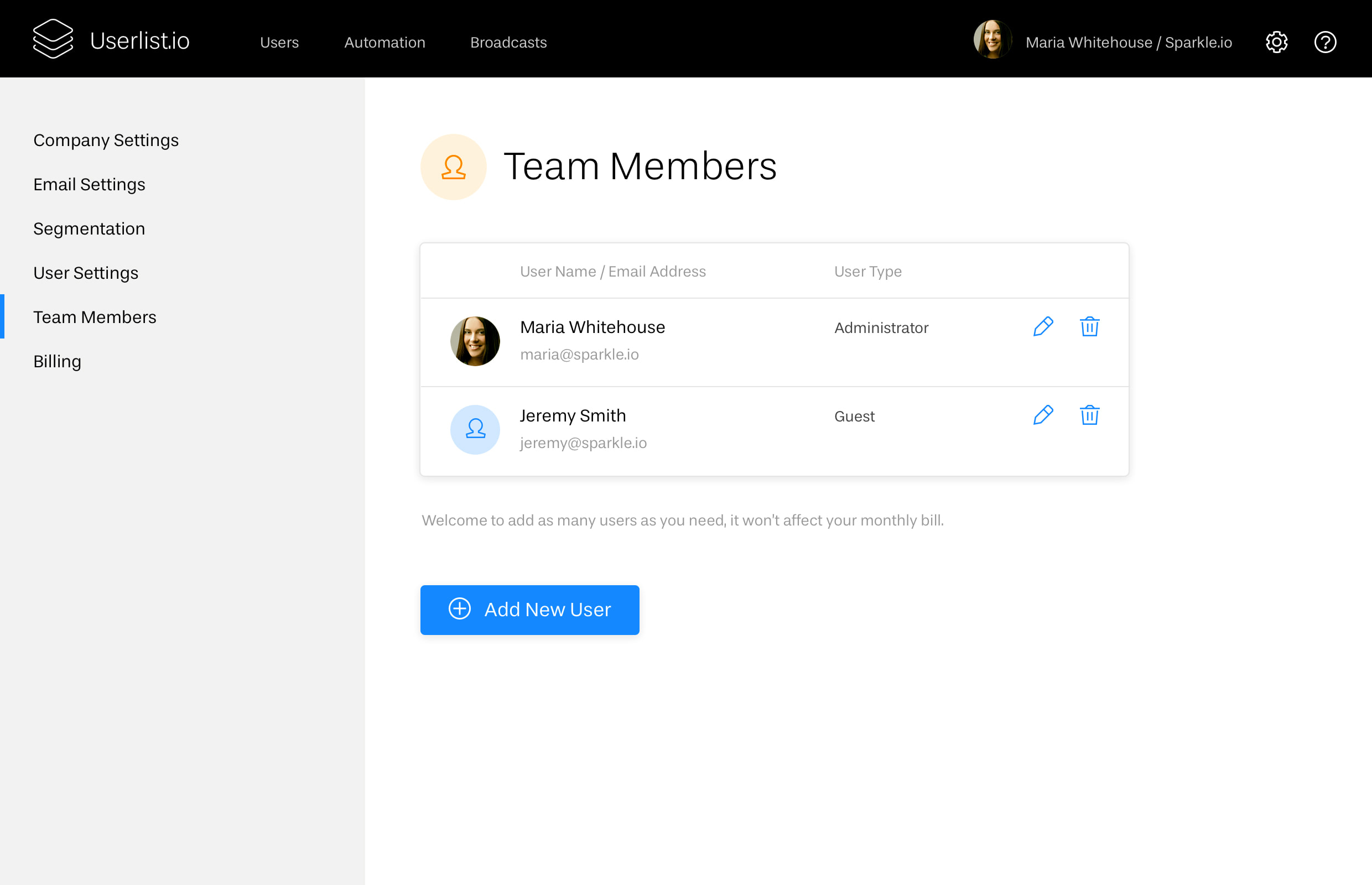 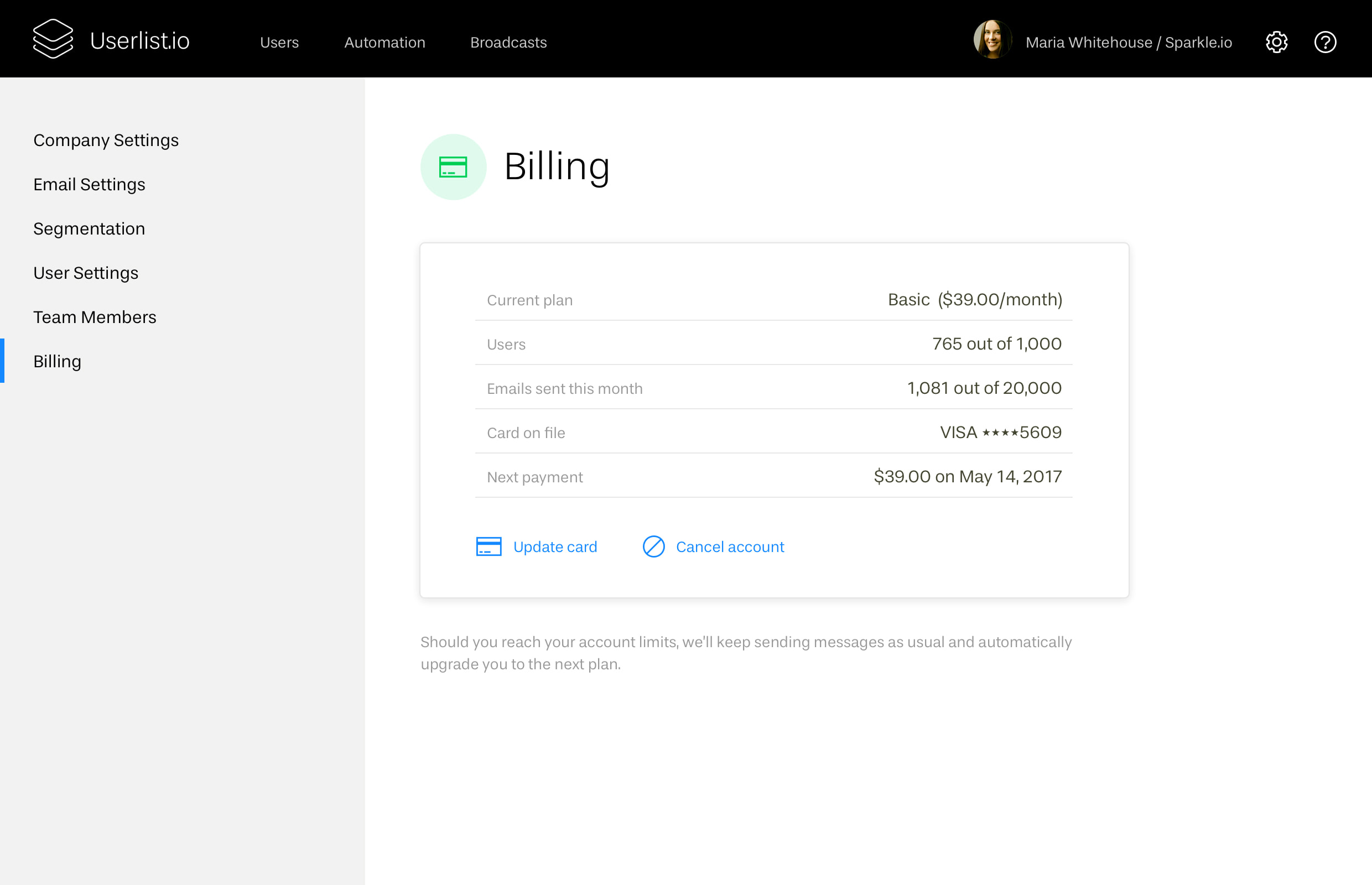 Which features do we build first?

Our product strategy is to collect as much early feedback as possible to inform further design decisions. But how do you collect feedback if the product isn’t ready, and you can’t give anyone access yet?

We made a conscious decision to “decompose” the app and give access to features gradually. For round one, which is happening right now, we’re working with the early adopters who pre-ordered the tool. Here’s the scenario we’re following:

In order to speed up the feedback loop, we decided to exclude email sending entirely from the first round. This decision dramatically helped us prioritize the features. If we’re not sending anything, then we can omit a big chunk of development work related to that. A good example of that is email and company settings: if you’re not sending anything, then there’s no need to have those yet. Also, email sending requires the largest effort to launch. It’s the most sensitive part where our system interacts with the ultimate users!

We’ve also omitted the broadcast features for now, because they’re rather straightforward and most founders shouldn’t have any problem using them.

Having held a number of onboarding calls already, we have gained multiple new insights. Here’s the most important one: paying users find the main value in the “sending” part of the app. While user journeys can be tracked using numerous analytics tools (even though founders did like our implementation of the activity feed).

We also confirmed our hypothesis that founders set up fairly simple automations, but experience a lot of pain by having to go to their developer department for every single tweak or task.

All this knowledge will help us focus on the “sending” part of the product, safely leaving out traditional, more robust analytics features (for now or for good).

We look forward to your feedback

Explaining the value of our tool — and what it does exactly — has been an important task for us, so we’d love to hear your feedback:

You’re also welcome to join our waiting list below, if you haven’t yet. Thanks for reading!

Ready to level up your customer messaging strategy? Join our mailing list below, and we'll send you a copy of printable email planning worksheets. With the worksheets, you will: 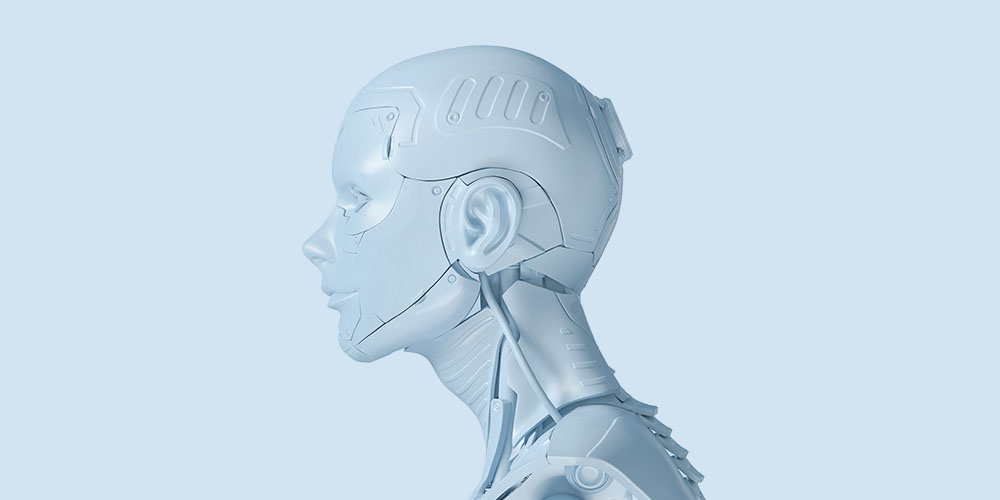 The Ultimate Guide to Customer Segmentation for SaaS 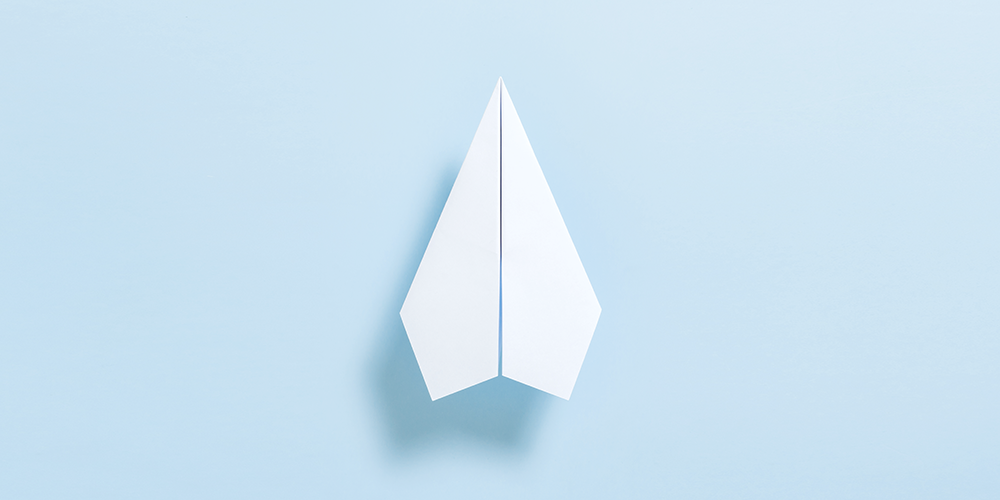 Behind the Scenes of Our Upcoming Public Launch 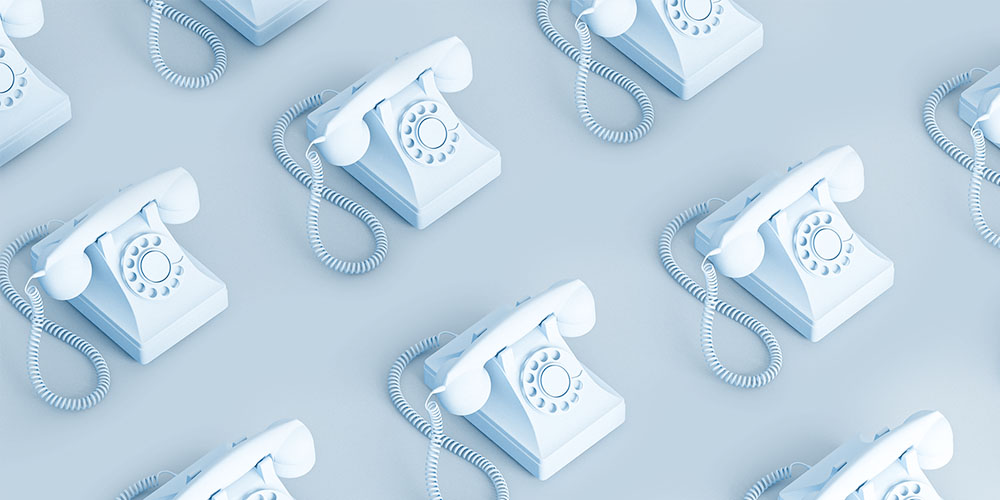 What Is Account-level Data for B2B SaaS?