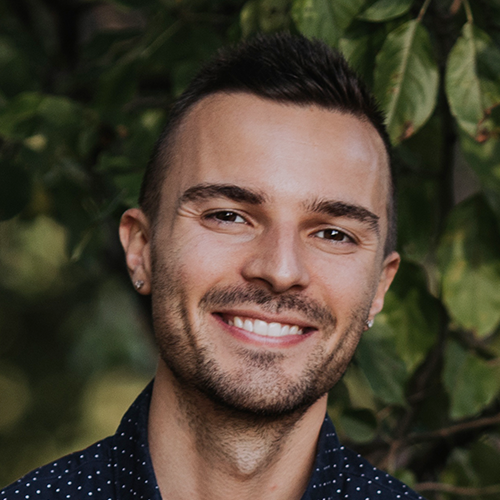 Templates are a very powerful onboarding instrument, especially for “open-ended” creative tools. How do you use them effectively? Today’s guest is Christopher Gimmer, co-founder of Snappa. You’ll hear Christopher’s take on design templates, repurposed content, conversion, the friction of confirmation emails, onboarding videos, and much more.

Christopher Gimmer is the co-founder of Snappa, a SaaS design app for non-designers. He also runs Bitbo, a real-time Bitcoin dashboard. In this episode, he and Jane of Userlist discuss design templates as a powerful SaaS feature as well as topics like conversion, friction, onboarding videos, intuitive design and more.

Christopher introduces us to his product Snappa and the story of its founding. A design app for non-designers, Snappa was founded in 2015 by Christopher and his co-founder Marc Chouinard. Prior to that, Christopher had a completely different background:

“My background was actually in finance and accounting, and eventually I met my co-founder, Marc, who was doing development on the side. Eventually, I wanted to become an entrepreneur, and I was really fascinated by the tech industry and software in particular.”

Christopher went on to learn a lot about SEO and content marketing when he realized that there was a need for a graphic design tool that would cater to, not designers, but marketers. Hence, the idea for Snappa was conceived.

Christopher disseminates the actual numbers that make up Snappa’s user base:

Having a design app at your fingertips is one thing, but what about the challenges with using it? Christopher admits that Snappa’s biggest roadblock is the lack of the users’ imagination.

This user-specific hurdle may have just been the reason Christopher and Marc decided to roll out design templates. We learn a little more about how these templates are actually created and by whom:

“When we first launched Snappa, we basically just contracted out freelancers and graphic designers, and didn't really give that much direction. Just like, you know, “create some templates for us”. And they were okay, but not the best. And then the problem as well was that a graphic designer might be really good at designing, but they might not necessarily know what makes a good YouTube thumbnail.”

Christopher reveals that Snappa recently overhauled their design process by acquiring an in-house graphic designer and a dedicated social media manager. Cooperatively, these professionals understand what makes a good template. Christopher also highlights the importance of keeping up with trends:

“It's not just, you know, throwing random things together. It's important to a certain extent to keep up with the trends. So we'll look at popular brands and popular accounts, see what kind of stuff they're posting, see what's popular right now. And then we’ll implement some of those templates as well.”

How do you understand what templates are more effective? Christopher gets into statistics and tracking methods. “We'll actually track statistics of individual templates,” he says, adding that a template that gets a ton of clicks but few downloads may be an indication of that template being too complex or difficult for the end user.

As for determining the template’s success metrics, Christopher divulges the key parameters he hones in on the most:

“We're probably not as sophisticated as, maybe, we could be. The ones that we're looking at right now are clicks, saves and downloads, and then the percentage basis.”

When asked about any insights acquired and discoveries made, Christopher reveals the following findings:

Christopher continues with some interesting tips on onboarding experience customization, particularly through onboarding videos, and how he goes about them at Snappa.

Snappa utilizes different video tutorials depending on the use case, where the user is in their journey, what they have searched for, and where they currently are (e.g. a dedicated landing page for Facebook, YouTube, etc). Christopher elaborates on this tactic:

And creating such videos doesn’t need to be a daunting task for founders. Snappa’s videos are one-minute long screenshares of templates being repurposed for each said use case — nothing scary at all.

We’ve learned a lot about how Snappa approaches the onboarding experience and customizes it, but there are more surprises around the corner — like the complete removal of confirmation emails. Giving a hat tip to his inspiration, Wes Bush of the Product-Led Institute, Christopher has this to say on the topic:

“Shockingly, when we did remove that step, sure enough, we got like a 20 to 30% lift from the sign-up because there was no longer that extra step of email confirmation. But, more surprisingly, the conversion rate from people entering the app to paid didn't really change that much. So we got almost a 20% lift from free to paid just from removing that email confirmation step, which blew me away, quite frankly.”

What about the powerful funnel modifier of requesting a credit card during signup? As a freemium product, Snappa does not require a credit card upfront, Christopher explains:

“Essentially, once they get into the app, they have almost all the features available for free, and then if they exceed the download limits, or click on a couple of the premium features, then they'll need to upgrade at that point.”

Christopher continues to expand on his onboarding methods and philosophy by disclosing his own ideal onboarding vision and tips for SaaS founders:

The episode comes to a close with Jane asking Christopher what he would have done differently should he have to start creating the product again from scratch. In hindsight, Christopher refers to two mistakes he made:

“1. If I can go back or if I started a new product, I would love to have a way to run A/B tests for certain changes within the app so that we can really understand conversion rates between the actual specific changes that we made to the onboarding.”

“2. I would try to remove as much friction from the onboarding as possible, make sure that the app is extremely intuitive and then create an onboarding flow that gives them enough upfront, but not to the point where it's overwhelming.”

Christopher can be found on Twitter. You can also use his product, Snappa, for free.